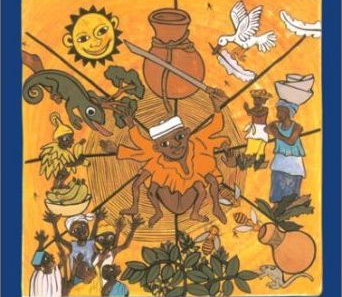 Have you heard the story about how the Spider captured the Python, a bunch of bees and the Leopard? What about that one about how the Hare managed to steal milk from Buffalo? Well, I could go on, and on, and on about these Ghanaian traditional children stories that are little known here. Story-telling has been a long tradition among many cultures in Africa, passed down from several generations.

Long before the days of radio and television, even before the appearance of the automobile, Africans entertained themselves with story-telling. Growing up in rural northern Ghana, we the children used to pile up on straw mats after dinner like canned fish, listening to each other’s stories in the open yard of the compound or jostling to sit in a semi-circle closer to grandpa or grandma to narrate the stories to us. Most of these stories were often accompanied with a song and everyone would join in a chorus. This would go on well into the night until our voices begin to fade and we drop off, one after the other in sleep.

Ananse as hero and villain

Spiders may be viewed elsewhere in the western world as scary and fearsome but in many of these folktales the Spider is very often the hero. Indeed, in the Akan language, one of the numerous Ghanaian languages, ananse is the word for spider. Indeed, the word ananse has become synonymous with story-telling. Anansesem means stories, it also means saying things that are too wild to be true. In other stories, it is the Hare that is the hero. These two creatures are portrayed as very clever, cunningly manipulating other animals and dominating them with the sheer use of their wit.

In one story for instance, Ananse, comes upon a lion who has captured an antelope and just about eat her. Meanwhile the antelope is protesting loudly and yelling for help:

“Please let me go, let me go. You promised you won’t eat me. How can you be so ungrateful after what I have done for you?”

“No, no, no”, roars Lion. I have been in the ditch for three whole days and haven’t had anything to eat, says Lion”.

“You are the only piece of food around and, even though I promised not to eat you, if I let you go, I am going to die of hunger”.

And then just when Lion opens his jaws to crack Antelope’s head, Ananse appears on the scene.

The Lion had fallen into a deep ditch and Antelope had helped him out with the promise that the Lion would not eat her. But no sooner had the Lion climbed up from the ditch than he had pinned down the antelope and about to eat her.

When Ananse bursts onto the scene. He finds Antelope crying and pleading to be released. After hearing the narration of Antelope, Ananse realizes that not only has Lion been ungrateful, he had also broken the promise he made to Antelope.

Ananse feels sympathy for Antelope and wishes that he could help her. But how? He comes up with a simple trick. He first rebukes Antelope for being gullible enough to believe that Lion would keep his promise knowing that Lion eats antelopes for a living. After that he turns to Lion.

“Lion, I don’t understand, I don’t believe the story”, pretends Ananse. “I am not at all convinced that compared to you, how a small creature like Antelope could help you out of that steep ditch”, says Ananse.

“Show me how it happened”, he says.

At that point Lion releases Antelope and jumps back into the ditch in order to demonstrate how it was until Antelope passed by and helped him out. Of course, Antelope would no longer stay around to help Lion climb out of the ditch for the second time. Neither would Ananse, after tricking Lion out of his meal for the day.

The stories are hugely entertaining, full of fun, drama, suspense and intrigue. For instance, even though Ananse and Hare are always playing the tricksters who can fool other animals, events can also sometimes turn them into villains when they overplay their hand.

In another instance, Ananse’s son Ntikuma, returns home with lots of food and a magic drum that can throw up plenty more food whenever the drum is hit. Ntikuma instantly becomes the darling and hero in Ananse’s household because it is a difficult food scarcity season. Ananse is not pleased that his son has become the centre of attraction and not he.

Ntikuma provides him all the instructions that led him to the big find – it is from a very, very deep well where an old lady resides. She is surrounded by a lush farm with different kinds of food crops and vegetables.

The next day Ananse heads straight to the well determined to surpass his son. He does find the old lady but instead of following her instructions, Ananse defies every one of them. In fact, he is not particularly polite to the old lady. So, he refuses to pick the small drum and instead grabs the big one, thinking that it would contain twice the amount food and perhaps, more of something else.

Upon returning home Ananse orders the whole village to come to his house for a special feast. He announces to everyone what was to happen and after that began to hit the drum as instructed by the old lady. To the horror of the starving people who came eager to fill their stomachs, instead of the promised delicious food, human eyeballs begin popping up and dropping all around them.

Besides entertainment, these traditional folk stories were the vehicles through which the elders transmitted the culture and societal norms to the younger generation. The stories invariably carried educational messages about proper conduct in the society such as humility, open-heartedness and respect for adults and elderly people.

There is a case to be made that making these stories available to Finnish kids in their own language could play an important role in minimizing racial, ethnic and anti-immigrant attitudes in Finland and thereby help bring down barriers to multi-culturalism. When Finnish children gain access to the stories through animated cartoons, radio programmes in books, the stories would most probably be their first form of contact with Africa, so to speak. It would help create a positive perception of a distant and little known Africa, contrary to earlier generation of kids who grew up absorbing stories about Tarzan, which generally portrayed Africans as primitive savages. To a very large extent, the enduring negative attributes about Africans still held by many Europeans stem from misrepresentations in early writings about Africans by Europeans such as stories of Tarzan and Tintin. Perhaps, it is now time to flip the narrative by replacing the images of Africa represented by Tarzan with that of Ananse and the Hare.

However, a vast quantity of the stories from these various African cultures remain undocumented. A few of them are randomly published in English and French, and there may be a few others in Finnish and in other Nordic languages, but they are hard to come by. Therefore, there is a need to put in an effort to have these stories documented and consistently published in accessible languages to children around the world, in order for them to enjoy some aspect of African cultural heritage.

Featured image: The illustration on the cover of the book The Pot of Wisdom. Ananse stories by the Canadian-Ghanaian author Adwoa Badoe and illustrated by Baba Wague Diakite.

The writer Linus Atarah is Ghanaian-born journalist. He studied Mass Communication and Sociology in Tampere University. Linus is a double-award winning journalist who has won journalists’ awards in Finland and in his home country Ghana.